The Interview of Lebork on Radio Kaszuby

It is also the broadcast in northern Poland covering cultural issues, among others. Radio Kaszuby interviewed the MUS.NET. managers of the Lebork Museum asking about the new fantastic app offering to visitors a combination of accessible tools and QR codes to have the museum collections at their fingertips. A very useful Google translator allows visitors to read the explanations in multiple languages. The recorded story telling is available in Polish and English. Thus, the Lebork Museum has reached a potential audience of over a dozen thousand visitors which correspond to the public reached by the Polish radio Kaszuby. The interview is available online at http://radiokaszebe.pl/. 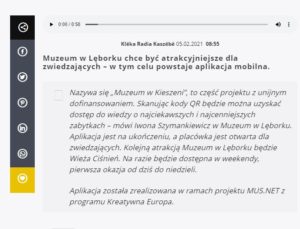